Keep up to date with what's going on at Azizi Developments with our latest press releases. You can also download any press releases along with their respective images.

Dubai, UAE, 22 January 2020: In line with its master-planned community presence in Meydan and long-standing partnership with Dubai Racing Club, Azizi Developments, a leading private developer in the UAE, is sponsoring the opening night of the Dubai World Cup Carnival and is part of this prestigious event on the racing calendar for the fourth consecutive year. Thursday’s race night ran over seven races.

At the Dubai World Cup Carnival Race Meet, which was hosted on Thursday, the 21st of January 2021, Mr Mirwais Azizi, Founder and Chairman of Azizi Developments, presented the trophy to Antonio Fresu rider of Military Law, the winner of the Al Maktoum Challenge R1 race and Mr Farhad Azizi, CEO of Azizi Developments, awarded Adrie de Vries rider of Lord Glitters as the winner of the Singspiel Stakes Race.

Azizi Developments’ senior management team presented the winners of the remaining five races of the Dubai World Cup Carnival on Thursday, the 21st of January 2021. 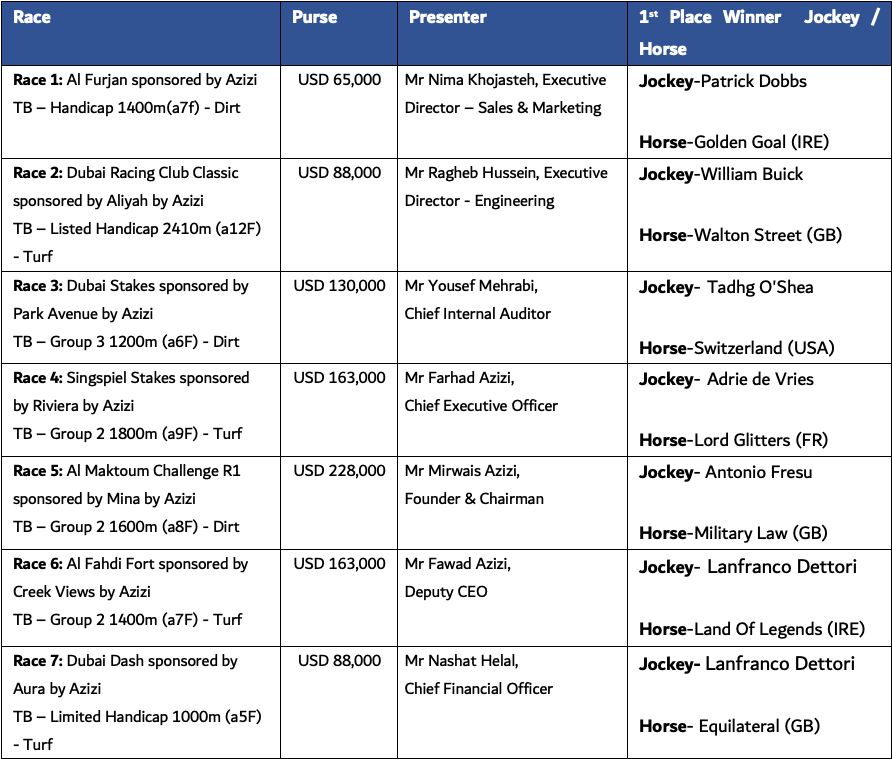 In his comments, Mr Mirwais Azizi said: “The Dubai World Cup Carnival, Racing at Meydan, and especially the subsequent Dubai World Cup, excite all of us at Azizi Developments every year. Especially in times like these, an event where communities can come together, with proper health precautions being taken and adhered to, to rejoice in hope and passion for a sport that is deeply rooted in the UAE’s heritage, is truly a touching experience for all who value not only equestrianism, but also the feeling of togetherness. We are absolutely delighted to sponsor this meet for the fourth year running, one that truly raises the bar for excellence every year, and we will continue to support high-profile events that put this great emirate – a global leader in both business and tourism - on the world stage.”

“We congratulate the very talented winners of today’s races and look forward to a new dawn of hope, success and progress”, he continued.